Skip to content
Previous Next
First Kids: The Centurion’s Servant

Boys and girls, this is a story from Matthew and Luke’s Gospel about a Centurion – a man in charge of 100 soldiers. Every time you hear the line, ‘Yes, sir, right away sir…’ why don’t you repeat the line and give a salute!

A Centurion stood before his soldiers. There were a hundred of them and they were used to following and obeying the centurion’s orders.

‘Fetch my shield!’ he ordered.

‘Bring me my lunch!’

But then something happened…

One day the centurion went home and there was some bad news. His servant was very, very sick. He really liked this servant, they were like good friends….he wanted him to get better but this time giving orders was no good. He couldn’t say to the sickness, ‘Go away! Leave my servant alone!’ That wasn’t going to work….the sickness wouldn’t be saying, ‘Yes, sir, right away sir!’

But he knew of something else, or rather someone else who could help – Jesus. So, he sent some messengers to see if Jesus would come, and they went to find Jesus and Jesus came with them to see the sick servant.

But while they were on their way, the centurion sent some more messengers to Jesus to say this time, “Jesus, I don’t deserve to have you visit my house. But I do know this. I’m used to giving people orders. I tell my soldiers to go here or go there, to fetch this or fetch that and they do it saying, ‘Yes sir, right away sir!’ I know you have power and you can just say the word and my servant will be healed. I know you can do that.”

Jesus was amazed when he heard the message. And he turned to the crowd and Jesus said this, “This man trusts me, he really, really does. I haven’t found this kind of trust even among our own people.”

And when the messengers returned to the house – guess what? The servant had been healed – healed by Jesus. ‘‘Yes, sir, right away sir!’

Why don’t you draw a picture of the centurion and use it to tell the story to someone else! 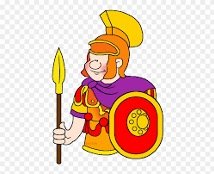