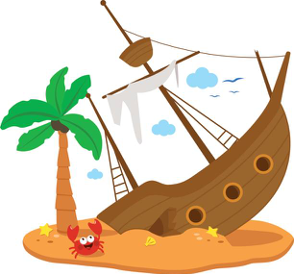 Have you ever heard of a shipwreck? That means a ship sails into trouble maybe in a storm or by hitting rocks. I’m sure it would be very frightening. In the Bible a man called Paul was involved in a shipwreck….but was he worried or frightened? Not at all! Why not? Because he knew God was with him!

Let me tell you about Paul. Paul lived about 2000 years ago. He was a follower of Jesus and travelled all over the place telling people about Jesus and how good it is to follow Him. One day he went to a city called Jerusalem and that’s when some big trouble started. Not very nice people didn’t like Paul talking about Jesus and they had him arrested. He was sent to Rome on a boat to stand trial before the emperor. Was Paul worried? Not at all! Why not? Because he knew God was with him!

On the journey, the weather got very stormy. The waves got bigger and bigger and the wind blew stronger and stronger. The little boat was blown all over the place. The sailors tried to keep them afloat. They dropped the anchor. Then they threw some cargo overboard to make the boat lighter, but it was no good. The storm was just too bad. Was Paul worried? Not at all! Why not? Because he knew God was with him!

Paul said to everyone on the boat, “I’ve had a visit from an angel of God! The angel told me that we’d get to Rome safely. The ship will be destroyed, but don’t worry, we will all survive. It will be okay.” And that’s what happened. The ship was wrecked off an island called Malta. The people who lived on the island took care of everyone from the boat and after a while they got another ship and sailed on towards Rome – just as God had promised. In Rome, Paul was still a prisoner and had to stay in his house a lot of the time and have a guard with him, but was he worried? Not at all! Why not? Because God was with him and Paul told everyone he met about Jesus and how brilliant it is to follow Him.

So, for you and for me – sometimes good things happen and sometimes difficult things happen. But whatever happens, always remember: Do we need to worry? Not at all. Why not? Because God is with us! And like Paul we can tell everyone we meet about Jesus and how much we love following Him!